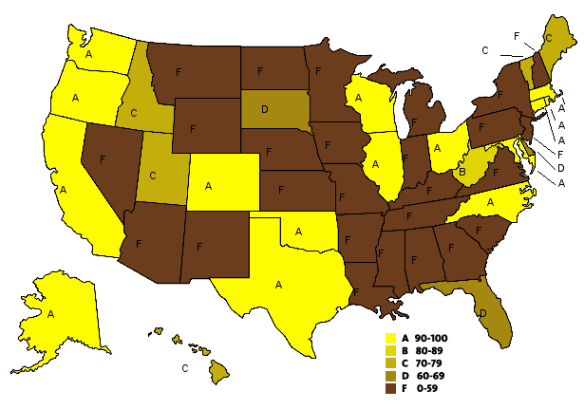 A report released this week by the National Institute on Money in State Politics gives Montana a failing grade on its disclosure laws related to campaign spending in elections.

“What we found interesting was that the state’s were either great or awful,” said the Institute’s Managing Director Denise Roth Barber. “There were very few in between.”

Barber describes NIMSP as a nonpartisan, nonprofit research organization that takes as one of its charges strongly advocating full disclosure in political spending. The report graded states on “disclosure requirements for super PACs, nonprofits and other outside spending groups.”

Barber said there is quite a bit of interest right now on the national level to require more disclosure on spending in federal races.

“But at the state level,” she said, “we don’t actually know in too many states, including Montana, how much money is even spent, let alone where it came from.”

She said the major campaign finance overhaul pitched by Gov. Steve Bullock and carried by Sen. Jim Peterson, R-Buffalo, called the TRACE Act, could have single-handedly brought Montana’s grade up from an “F” to an “A”. On top of increasing disclosure, that bill would have increased the fines for violating Montana’s current election laws. The bill passed the Senate 29-21 after a heated debate. However, the bill never made it to the House floor and died when the Legislature adjourned.

Sen. Eric Moore, R-Miles City, complimented Sen. Peterson and supporters for their intentions with the TRACE Act, but said he and other opponents believe the U.S. Supreme Court has made it clear: money equals speech when it comes to political spending.

“The protection of anonymity in political speech has been a part of this country since before the founding of the Republic,” Moore said.

E-mails published this week show a calculated plan by the current Republican leadership in the Montana Senate to oust the previous leaders – adding to the growing rift between conservative and moderate Republicans. In this edition of “Capitol Talk”, our weekly legislative analysis program, News Director Sally Mauk talks with Lee newspaper reporters Chuck Johnson and Mike Dennison, about what that rift might mean both for the Republican and Democratic legislative agendas… 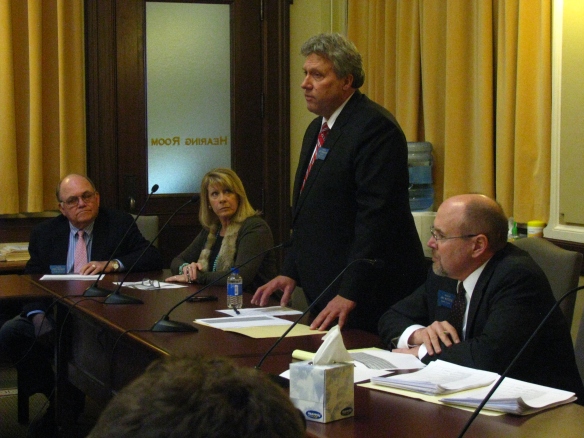 Republican leaders in the Montana Senate are reacting to a series of emails showing a sharp divide between the moderate and conservative factions of their party.

The private emails obtained by the Great Falls Tribune speak of a long-term strategy of Senate President Jeff Essman (R-Billings) to create an atmosphere leading to a more conservative Legislature and a more conservative Montana Supreme Court. In the emails, Essman suggested moderate Republicans could ‘derail the conservative agenda.’ He said moderates were in a position to block such an agenda if they decide to align with Democrats.

But on Thursday afternoon, Essman tried to alleviate sore feelings about the emails during a Senate Republican Caucus meeting. He said he’s always been consistent about his agenda to create a ‘conservative, balanced budget.’ He assured the group he was elected Senate President to serve the whole body, Republicans and Democrats.

“My responsibility to them is to make sure their bills get a fair hearing and that the rights of the minority are respected,” he said.

The emails speak about not being able to trust Peterson not to work with Democrats, calling him a chump. Peterson said he finds the emails unbelievable, saying current leadership seems to be making no room for those he calls ‘Reagan Republicans.’

“You know, Reagan prided himself on being able to hear both sides of a conversation and finding a solution. And here that’s getting tougher to do…without feeling your future being jeopardized,” Peterson said.

Senate Majority Leader Art Wittich (R-Bozeman) doesn’t shy away from saying he was strategizing for a way to promote his world view in the emails.

“It’s not just conservatism, I think there are other things that we were concerned about,” he said. “Frankly, we wanted strategic thought, we wanted competence in our leadership.”

He said the ideological debate going on within the GOP is a discussion happening across the country and that the emails don’t change the intentions of his party to work across the aisle and within their own aisle to find common ground.

The lawmakers are back in town.

Members of the 2013 Legislature arrived in the capitol this week.

Capitol Reporter Dan Boyce tells us the parties have chosen their leadership in the Senate and House of Representatives.

And here’s the Associated Press story on the same topic by Matt Gouras:

The GOP instead chose Sen. Jeff Essmann of Billings as their nominee for Senate president, Art Wittich of Bozeman as majority leader and Debbie Barrett of Dillon as speaker pro tempore.

Republicans chose Mark Blasdel of Somers to fill a vacant House speaker’s post. Gordon Vance of Billings will be the new majority leader and Austin Knudsen of Culbertson was picked as speaker pro tempore.

Partly because of this disparity, some lawmakers are looking to change how these estimates are approved by the legislature.

State lawmakers use a revenue estimate every Legislative session as a baseline. In other words, they say,’this is our best guess of how much money we’re going to have over the next two years.We’re going to use this figure to dictate how much we spend—on programs, infrastructure—whatever.’

The spending and the revenue estimates should be pretty close. But what we’re seeing this time is that the money coming in is much higher than they estimated. Higher by about $170 million.

How does that end up happening?

Well, the revenue estimate comes to the legislature from a committee of lawmakers that meets between sessions, the Revenue and Transportation Interim Committee. They talk with legislative analysts, analysts from the Governors office and other economists before they bring that best guess to the legislature as a Resolution.

“So they have that basis to make a decision, and when they make a decision they know there’s the potential that those numbers can be revised later,” Johnson said.

He says lawmakers seem pretty happy with that process until Revenue Estimate Resolution makes the legislature.

“The resolution doesn’t have to pass both the Senate and the House to make a change to the revenue estimates is what current statute says,” he said.

The bill does not have to go through the whole legislative process State Senator Jim Peterson (R-Buffalo) says that’s unique.

“It’s the only resolution in the entire legislature that can sit in the committee for 90 days and not be acted upon and yet,” he said. “By statute it becomes the baseline for passing (the budget.)”

Fiscal Analyst Terry Johnson says that happened in the House in 2011.

“Last session, the resolution never went to the Senate. So the Senate is arguing ‘We never even had the chance to review it or make changes,'” Johnson said.

Senator Jim Peterson suggests creating a subcommittee from both the House and the Senate to hold detailed hearings on the estimate during the session “to give it transparancy, to gather information, to educate legislators and to give the numbers some credibility.” He says at least that way both chambers would have input on the estimate before it automatically moves on.