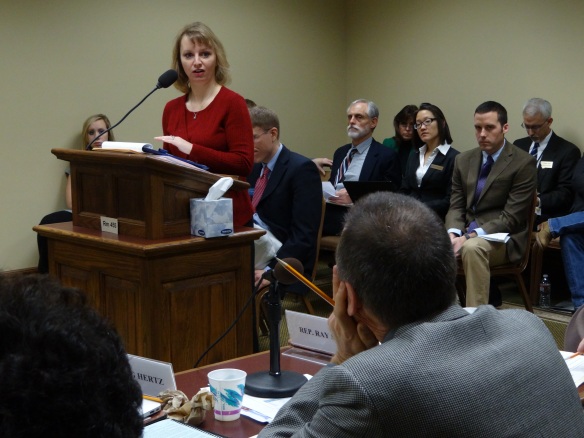 State lawmakers are trying to address the concerns about so-called ‘dark money’ in politics–anonymous money which led to the pervasive and largely negative third-party ads that dominated the 2012 election.

These legislators are coming at the issue from very different angles.

Tuesday morning, the House State Administration Committee heard two bills which would raise the contribution limits for Montana candidates. Representative Steve Fitzpatrick (R-Great Falls) is offering HB265, which essentially doubles the amount that can be given to candidates for statewide or legislative races. Fitzpatrick says he was a victim of attack mailers sent by third party groups, which have new leeway under the US Supreme Court’s Citizens United decision.

“We can’t change Citizens United,” Fitzpatrick said. “What we can do is level the playing field between the candidates and the wealthy groups that are able to finance that.”

Reichner looked to the most recent gubernatorial race between Democrat Steve Bullock and Republican Rick Hill. He says while each candidates campaign spent about $1 million,  $7 or $8 million was spent on race by outside groups. “You don’t really control the message,” he said. “The message is controlled by the third parties and this is frustrating for a campaign.”

He says he is open to amending his bill. He’s consulting with Governor Steve Bullock’s office, which does not support the bill as written.

Meanwhile, downstairs in the House Judiciary Committee, Representative Ellie Hill introduced her HJ6, which encourages implementation of I-166, an initiative passed by 75 percent of voters last fall. It directs statewide officials to pursue an amendment to the US Constitution stating corporations are not people and should not have the right to contribute to political campaigns. She says her resolution allows the Legislature to officially state the US Supreme Court erred in Citizens United.

“At certain times in our history, we have had an opportunity through our separation of powers to rise above the judicial branch, and that’s certainly what we’re preparing to do with a Constitutional Amendment,” she said.
Supporters of Hill’s resolution believe this is a better way to reign in third party spending, rather than raising limits for candidates to spend more.

Democratic incumbent Senator Jon Tester is locked in a too-close-to-call race with Republican Congressman Denny Rehberg. One of the main themes of Rehberg’s criticism of Tester is that he is a rubber stamp for President Obama, voting with the president 95 percent of the time. In this feature interview with News Director Sally Mauk, Tester disputes that statistic – but says he understands why his opponent wants to make it a big deal…

Either Republican Congressman Denny Rehberg or Democratic Senator Jon Tester will be out of a job soon, as Montana voters decide which one they want to be in the U.S. Senate for the next six years. Their high profile race has attracted millions of dollars spent on attack ads and mailers and phone calls that have bombarded voters’ homes for months now.
In tonight’s feature interview, News Director Sally Mauk talks with Congressman Rehberg, about why he’s giving up his House seat to make this run for the Senate…

The state department of justice is filing an appeal to a federal judge striking down Montana’s campaign contribution limits. This ruling from District Judge Charles Lovell removes spending limits on anyone running for office in the state.

The election waits just over a month away.

Judge Lovell says he wanted to put the ruling out as quickly as possible to allow it to take affect for the end of this campaign season. Conservative groups who brought this lawsuit against Montana’s campaign contribution laws are hailing U.S. District Judge Charles Lovell’s decision.

Judge Lovell issued a short, five-page ruling on Wednesday. He writes the court and the parties all agreed to place this matter on an expedited schedule so that it will be resolved prior to this year’s election.

Lovell agreed with those filing the suit in light of the U.S. Supreme Court’s 2010 Citizens United ruling, which allows unlimited corporate political spending—saying that spending is protected as free speech.

His decision strikes down a provision making it unlawful someone to misrepresent a candidate if the attack is known to be false. And it removes spending limits—limits for individuals, political committees, political parties and corporations.

As of our deadline, the state Attorney General’s Office was working to file a stay in the case with the 9th US Circuit Court of Appeals to halt the ruling for now. The office of political practices is discussing with their lawyers how to exactly interpret the Lovell ruling.

American Tradition Partnership is one of the plaintiffs in the suit against the state’s laws. The group is responsible for other recent lawsuits striking Montana’s century-old Corrupt Practices Act and the state’s ban on partisan endorsements of judicial candidates.

Both suits were successful using Citizens United as their rationale. The limits that were struck down in this latest case range from one hundred sixty dollars that an individual can contribute to a state House candidate, up a total of almost $23 thousand dollars that a gubernatorial candidate can accept from all political party committees.

The law also limited aggregate donations from political parties. A candidate for governor, for instance, was limited to accepting a maximum of $22,600 from all political party committees.

Montana Director of American Tradition Partnership, Doug Lair said in a statement that “The old contributions limits were so low candidates had no choice but to grovel before special interests to get elected.”

“All Montanans should be vitally concerned that an outside group, American Tradition Partnership has through litigation undermined all of our campaign finance laws and they won’t even say who is funding their efforts,” Pearson said. “We support the Attorney General’s efforts to get a stay on this decision, it’s got to be one of the worst campaign finance decisions in the history of Montana.”

Like it or not, Lovell’s decision is the new campaign contribution law of the land right now, with five weeks to go until voting day.

The non-partisan “Center for Responsive Politics” estimates almost six BILLION dollars will be spent in this election – a record amount. But what most concerns the Center’s Executive Director, Sheila Krumholz, is that we don’t know who is spending a lot of that money. In tonight’s feature interview, Krumholz talks with News Director Sally Mauk about campaign spending in the wake of the Citizens’ United decision… 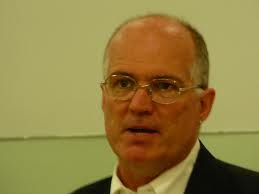 A national coalition of groups called “Move to Amend” believes the 2010 U.S. Supreme Court decision known as “Citizens United” is so egregious, that they can muster enough support to pass a constitutional amendment that would essentially overturn the decision. Citizens United allows corporations and unions to spend as much money as want on political ads, because the court ruled they have the same rights to free speech as indidivuals. In this feature interview, News Director Sally Mauk talks with attorney and “Move to Amend” spokesman David Cobb about the constitutional amendment his group is working to pass – and what it would do: 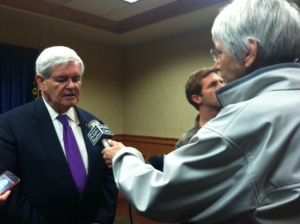 Former Republican presidential candidate Newt Gingrich was in Missoula recently, to address the state Republican party convention. After his talk, he met with Montana reporters, including News Director Sally Mauk – who asked him about Mitt Romney, campaign financing, Citizens United, and the impacts of oil booms…

Schwietzer and Bohlinger signed the petition to put Initiative 166 on the November ballot during a ceremony attended by reporters and supporters of the Initiative.

The initiative would establish a state policy that corporations are not entitled to constitutional rights. It’s in response to the U.S. Supreme Court’s controversial Citizens United decision, which says bans on corporate campaign spending are unconstitutional. That decision means I-166 has no legally binding way to prevent corporate political spending. Governor Schweitzer says that’s ok–the initiative is meant to send a message about values.

The group sponsoring this initiative, Common Cause Montana says Montana is the only state considering an initiative like this right now. Organizers need to gather nearly 25 thousand signatures across the state by June 22nd in order for the initiative to be placed on the November ballot.

In this feature interview, News Director Sally Mauk talks with democratic strategist and CNN political analyst Paul Begala about Montana’s U.S. Senate race between Jon Tester and Denny Rehberg, about the presidential race, and about the Citizens United decision that is projected to lead to billions of dollars being spent in this election year….

A Montana group is looking to put an initiative on the November ballot that would set state policy banning corporate money from elections. The petition filed Tuesday with the Secretary of State’s office attempts to respond to the Supreme Court’s Citizens United decision which prohibits corporate spending bans.

This initiative would be a non-binding statement from the people more than anything else.

93 year old former republican Secretary of State Verner Bertelsen says he tries to limit his political and community involvement these days. But he spoke to reporters about this new petition effort called ‘Stand with Montanans’ on Tuesday. He said he was making the exception to help address what he says is an important problem for both parties. And he’s looking all the way to the top.

“Without an amendment to the U.S. Constitution declaring that corporations are not people that money is not speech, policies aimed at cleaning up speech and reducing the volume and influence of money in politics will remain under serious threat,” Bertelsen said.

In a small way, that’s what this petition seeks to eventually accomplish. The group Common Cause Montana filed the petition. After it’s approved, Common Cause will try to gather the signatures needed to put it on the ballot as an initiative.

It would provide Montanans a chance to respond to Citizens United as well as the Supreme Court’s blocking of Montana’s statewide corporate spending ban. Helena Attorney Jonathan Motl wrote the petition.

“This policy says to Montana’s elected and appointed office holders ‘work to change the law of the land so that the political system belongs to human beings (individuals) not corporations,” Motl said.

Motl says it would direct state lawmakers to do what they could to limit corporate spending, trying to find what could work within Citizens United. It also would call on Montana’s Congressional Delegation to work to pass an amendment to the U.S. Constitution to nullify Citizens United. But all of this would be essentially a statement from the voters. It’s non-binding, lawmakers wouldn’t have to do anything.

The Montana Shooting Sports Association is part of the lawsuit against the state’s corporate spending ban.

“Well this sounds to me like some kind of PR campaign than an actual initiative. There are a lot of steps between getting signatures on some petition forms and amending the US constitution,” said Association President Gary Marbut. He argues groups like his should be allowed to use member dues to help influence elections.

Petition author Jonathan Motl says even though this initiative would not be binding, it is far from useless fluff. He says statements like this are how society changes direction.

Motl hopes it could be part of a groundswell that could one day charge federal policies. But the first step is seeing if his petition can gather enough signatures to even make the ballot.