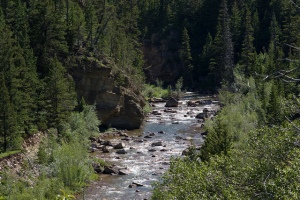 A lawsuit concerning a bridge on a county road could lead to major impacts on Montana’s stream access law in a case pitting private property advocates against prominent public access groups.

The state Supreme Court is considering the lawsuit over easements now. Atlanta-based media mogul James Kennedy owns a sizable piece of property on the Ruby River. Several county bridges cross the river on his land and a district court judge found it legal for Kennedy to fence off access to the river on one of those bridges—because of the type of ‘prescriptive easement’ on the bridge.

Public lands access advocates appealed that ruling to the Montana Supreme Court. Now, before the high court, Landowner James Kennedy is arguing a U.S. Supreme Court Decision on a case between Montana and PPL Montana from last year means the state’s stream access law should be thrown out or limited.

President of the United Property Owners of Montana Marc Robbins, said the U.S. court decided the state only owns the banks and beds of rivers if the river was commercially navigable at the time of statehood.

The Ruby River and other small streams like it to not meet that criteria.

“We feel that the state erred in its taking of the stream beds years ago,” Robbins said, “and this PPL ruling definitely turned the tides of the basis for what stream access was founded on.”

Montana Trout Unlimited Executive Director Bruce Farling believes these issues were hashed out by the State Supreme Court before the Stream Access law was established in the 80s.

He said the court decided the state constitution says the public owns the state’s water and they should be able to use it.

“They told the legislature at that time, they said ‘look, the public should have access on these streams to be able to recreate on them, irrespective of whom owns the bed and bank,’” Farling said.

The state supreme court has not made any decision on the case.

The former campaign manager for President Barack Obama, Jim Messina, was in Missoula over the weekend to deliver the commencement address to his alma mater, the University of Montana. Messina currently has his own consulting firm, and also is national chairman of “Organizing for Action”, a nonprofit group working to help the president achieve his legislative agenda. In this feature interview, Messina talks with News Director Sally Mauk about OFA’s priorities: climate change, gun control and immigration reform.

A report released this week by the National Institute on Money in State Politics gives Montana a failing grade on its disclosure laws related to campaign spending in elections.

“What we found interesting was that the state’s were either great or awful,” said the Institute’s Managing Director Denise Roth Barber. “There were very few in between.”

Barber describes NIMSP as a nonpartisan, nonprofit research organization that takes as one of its charges strongly advocating full disclosure in political spending. The report graded states on “disclosure requirements for super PACs, nonprofits and other outside spending groups.”

Barber said there is quite a bit of interest right now on the national level to require more disclosure on spending in federal races.

“But at the state level,” she said, “we don’t actually know in too many states, including Montana, how much money is even spent, let alone where it came from.”

She said the major campaign finance overhaul pitched by Gov. Steve Bullock and carried by Sen. Jim Peterson, R-Buffalo, called the TRACE Act, could have single-handedly brought Montana’s grade up from an “F” to an “A”. On top of increasing disclosure, that bill would have increased the fines for violating Montana’s current election laws. The bill passed the Senate 29-21 after a heated debate. However, the bill never made it to the House floor and died when the Legislature adjourned.

Sen. Eric Moore, R-Miles City, complimented Sen. Peterson and supporters for their intentions with the TRACE Act, but said he and other opponents believe the U.S. Supreme Court has made it clear: money equals speech when it comes to political spending.

“The protection of anonymity in political speech has been a part of this country since before the founding of the Republic,” Moore said.

Missoulians John and Sue Talbot will receive Honorary Doctorates of Humane Letters at the University of Montana commencement ceremony tomorrow. The Talbots are being recognized for their long and generous service to both the university and the community. John Talbot is a former publisher of the Missoulian newspaper, and the journalism building on the University of Montana campus is named after Sue Talbot’s father, Don Anderson, a well-known newspaperman. The Talbots have supported and been active in dozens of community and university organizations.  In tonight’s feature interview, News Director Sally Mauk talks with the Talbots about their love of UM and Missoula, and why they think both the town and gown have a bright future. The Talbots met in college when Sue was attending Radcliffe, and John was at Harvard..

The state health department is reporting an unusually high number of whooping cough cases for this time of year.
More than 265 infections have been recorded so far in 2013, mostly among school-aged children.
Capitol Reporter Dan Boyce says Health Officials worry about the trends they’re seeing.

Health officials are considering changes to the way the state operates Medicaid.

The 2013 Legislature approved rate increases to providers of Medicaid—the government health service for the poor.

Capitol Reporter Dan Boyce says stakeholders are applauding some of the changes, but suppliers of medical equipment see a big problem.

In response, the City of Missoula has signed a comprehensive settlement agreement to reform how the police conduct those investigations.

The announcement comes almost one week after the DOJ’s Civil Rights Division announced agreements to improve how the University of Montana responds to sexual assault allegations.

The investigation into the Missoula Police Department examined over 350 sexual assault reports from 2008 to 2012.

The report says the Police Department’s response to sexual assault allegations were hampered by poor communications sometimes relied on gender-based stereotypes. It specifically points to a case in which a police detective told a woman the gang-rape she was reporting “was probably just a drunken night and a mistake.”  The detective then told her she “came across as kinda passive”. The same woman told Justice Department investigators she felt the detective was not only intimidating and rude, but his demeanor and statements left her feeling he didn’t believe her and that the assault had been her fault.

Another woman who ended up not pursuing criminal charges, reported a detective was constantly telling her how difficult it would be to testify in court.

The agreement requires the police department within two-years implement or revise its policies for investigating assaults, provide training to officers and their supervisors and change practices that discourage women from reporting sexual assaults. 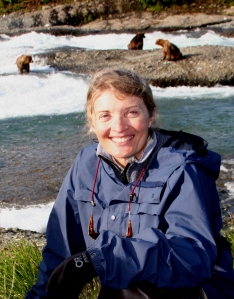 U.S.G.S. research ecologist Kate Kendall has been studying grizzly bears for over 30 years and done groundbreaking research into the grizzlies that live in the Northern Continental Divide Ecosystem. Kendall is retiring this month, and she recently sat down with News Director Sally Mauk to talk about her career, her research, and her thoughts about the future of the great bear. Kendall started with the National Park Service right out of college, and moved to Bozeman in 1977 to join the Interagency Grizzly Bear Study Team – one of only a couple of women working with dozens of men.

Water temperature and the types of life it supports are some of the things scientists at the Flathead Lake Biological Station track to determine water quality in the Lake and its tributaries. The Bio Station has been monitoring water quality, and amassing information about the Flathead since its founding in 1899. The station is part of the University of Montana, but it’s funding is delegated by the state legislature as well as through other state, tribal, and federal grants. However, finding funding outside of the legislative allocation has been drying up. Research Scientist Tom Bansak with the Flathead Lake Biological Station says it costs about $150,000 each year to run the Bio Station. Bansak says the state legislature allocates $100,000 to the Station.

In August 2011 the Flathead Lake Biological Station set up two hi-tech buoys along the lakes deep trench. The buoys transmit weather and water quality information to the Bio Station. The information is available to the public, updated every 15 minutes, through the FLBS website.

“And so for the last few years, the Bio Station itself has been making up the shortfall to keep our long term monitoring program going, and there’s a tremendous amount of value of having a long term record of conditions on a water body like Flathead Lake,” Bansak said they started using a more “scientifically rigorous” monitoring protocol in the 1970’s with a proposal to mine in the Canadian North Fork Flathead River basin.

Some of the things researchers look for:

Water quality information available to the public through the FLBS website.

“Tracking the trends of increases and decreases of those different things gives us a good indication of what’s happening in the lake; whether water quality is staying stable, increasing or decreasing,” Bansak said.

Bansak says paying people is the biggest budget item. Next are the tests they run on the water samples, facilities costs, fuel for the boats and maintenance for all the vehicles and equipment. About a year and a half ago the station received a $1-million pledge from a donor wishing to remain anonymous. The Bio Station has until the end of 2014 to match the pledge dollar-for-dollar, and Bansak said they’re at over $250,000 now. Bansak is also the Development Coordinator for the Flathead Lake Monitoring Challenge grant.

As part of public outreach and fundraising the Tamarack Brewery of Lakeside is hosting a Community Tap Night with 75-cents of every pint sold to benefit the Biological Station Wednesday the 15th from 6 to 9PM. 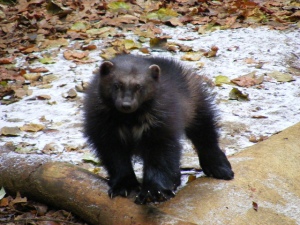 Montana wildlife officials last week expressed their formal opposition to a proposal from the US Fish and Wildlife Service to list the wolverine on the Endangered Species List.

The Montana Department of Fish Wildlife and Parks filed the letter by the end of the proposal’s public comment period last Monday.

USFWS says global climate change will significantly reduce wolverine habitat over the next century and protecting the species now will bolster the population for an expected future decline.

“We maintain that we’ve had an expanding population, even with climatic conditions that are maybe similar to what they’re predicting,” said Montana FWP Spokesman Ron Aasheim. “Our feeling is that the best available science doesn’t indicate that there’s a need to list the wolverine.”

“The wolverine is a bit unusual in the case that the current status is improving,” said USFWS Biologist Shawn Sartorius, who heads the agency’s wolverine research, but added ultimately, under the Endangered Species Act, it’s future threats that count.

The main impact Sartorius cites for the listing is the reduction of mountain snowpack levels. Wolverines use snow to build dens and raise their young. He said those impacts are being felt now.

USFWS says the reason wolverine populations continue to expand now is they are still filling the available habitat after being nearly wiped-out in the 20th Century “due to broad-scale predator trapping and poisoning programs.” Sartorius said listing the animal would give the agency more tools to help grow the population as much as possible.

“We have some potential to get wolverines into some of those places that they used to occur in to help expand their range before the full impact of climate change occurs,” Sartorius said.

Now that the public comment period is finished, USFWS will looking over their research and the comments to make their decision on listing the wolverine. Sartorius said a ruling will be made in February of 2014.

In the meantime, an injunction has been placed on trapping wolverines in Montana, which FWP also opposes. That prohibition would continue if the species is listed.