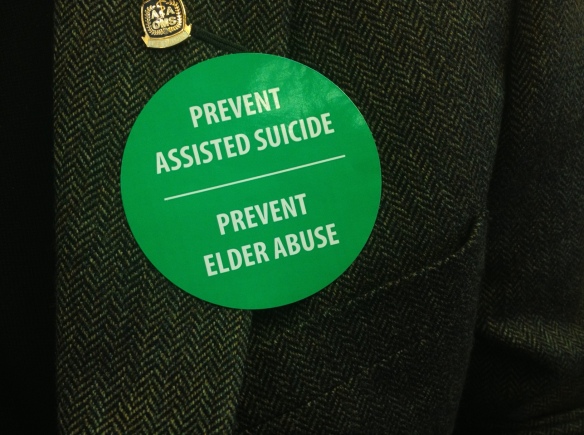 A bill which would clarify the state’s position on physician assisted suicide is being considered by a committee of state lawmakers. Sponsor Senator Dick Barrett (D-Missoula) says his legislation clarifies a Montana Supreme Court Decision which says citizens have a right to ask for ‘aid in dying’.

Barrett says the Montana Supreme Court’s 2009 ‘Baxter Decision’ makes his bill necessary, due to it’s vague and broadly written nature. Helena attorney Ron Waterman supports Barrett’s bill on that note, saying it “avoids…doctors having to drag out the Baxter Decision, it’s almost 70-some pages, read through it and try to figure out what it means to them.”

“It would have been extremely rare for this bill to be needed, when it was needed it was needed critically,” said primary care physician Kenneth Eden. He says hundreds of his patients have died under his care—but a small number of them were suffering greatly and pleaded for a way to die. Supporters say this bill would give people more freedom, to make that final choice about the end of their lives.

Opponents of the bill believe it’s taking away freedom.

“I am 64-years old and I do not want a doctor or a nurse telling me or my wife that we should murder ourselves,” said President of the group Montanans Against Assisted Suicide Bradley Williams. “We have the right to be left alone.”

The bill does not in any way mandate the use of assisted suicide, it would be voluntary.

Those against the bill do say it allows for elder abuse—especially when inheritance is involved. Also, Kalispell physician Annie Bukacek says doctors are often wrong when predicting things like life expectancy. She brought up a friend with breast cancer that moved to her lungs. Doctors told her she had 6 months to live, “and that was 15 years ago, she still has a medical practice and she’s still playing tennis. If assisted suicide becomes legal in this state there will be Montanans who kill themselves who could have had many quality years.”

Sidney Republican Representative David Halvorson brings up a theological argument against the bill. He points to the Declaration of Independence, which provides the inalienable rights given by God—rights like the right to life.

“And therefore to attempt to bargain away your right to life through assisted suicide is a bargaining away of the grant of the almighty,” he said.

No action was taken on the bill. Both Oregon and Washington have similar laws which allow physician assisted suicide.

1 thought on “Passionate testimony from public on assisted suicide bill”