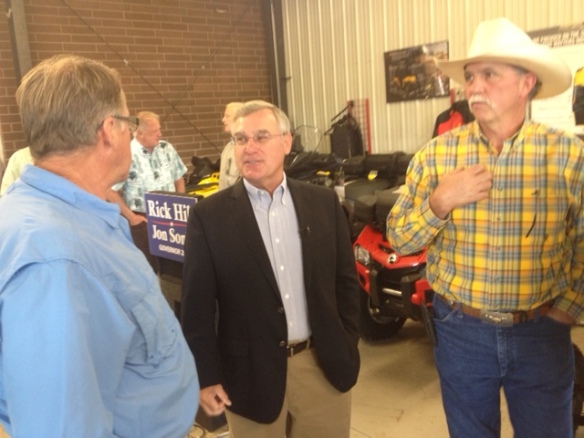 Republican Gubernatorial Candidate Rick Hill has released the first of his policy positions for wildlife in the state. It calls for a new direction and new leadership at the Montana Department of Fish, Wildlife and Parks.

“Many of you know that I wasn’t born and raised in Montana. I tell people I got here as soon as I could,” former Congressman Hill said at One Way Marine, a Helena business selling ATVs and boating supplies, on Monday.

He was holding a press conference to announce his collection of wildlife policy proposals entitled, “Protecting Montana’s Outdoor Sporting Heritage”

It all starts with displeasure at the state agency that manages wildlife.

“In every corner of the state of Montana I hear one thing, and that’s frustration and anger with Fish, Wildlife and Parks,” Hill said.

Hill says FWP has lost the trust of the people of Montana and that relationships have broken down. More than anything else, Hill points to the state’s management of predators, the gray wolf especially.

He thinks many decisions regarding wolves have been made for political reasons and not based on sound science. He believes the number of wolves is much higher than the minimum 650 wolves estimated by FWP.

“And that the number is beyond the tipping point in some instances and that is going to dramatically impact the remaining number of wildlife that we have and so we believe that they’re not aggressive enough,” Hill said.

Hill also says he wants the agency to refocus on working for its customers—meaning hunters and fisherman. Hunting and fishing license fees and taxes on equipment provide most of the agency’s budget.

Hill’s proposal also suspends efforts to establish wild, free-roaming bison in the state. Hill says he would change the leadership at FWP, including new appointments on the FWP citizen commission—which sets the agency’s policies.

FWP Director, Joe Maurier was not available for comment today.

Hill is running against Democrat Attorney General Steve Bullock this November. Bullock campaign Spokesman Kevin O’Brien says Bullock is the only candidate who has fought in court for the rights of Montana sportsmen and personally explained to the Secretary of the Interior the importance of removing the gray wolf from the Endangered Species List.

“Seems that there are only two ways to become a wildlife biologist in Montana.” O’Brien said, “The first is you go to school and get a degree and the second is you get elected to public office. We know which direction Congressman Hill is taking. More than anything, especially with wolves, we need to get the politicians and their grandstanding out of the way and let the scientists do their jobs.”