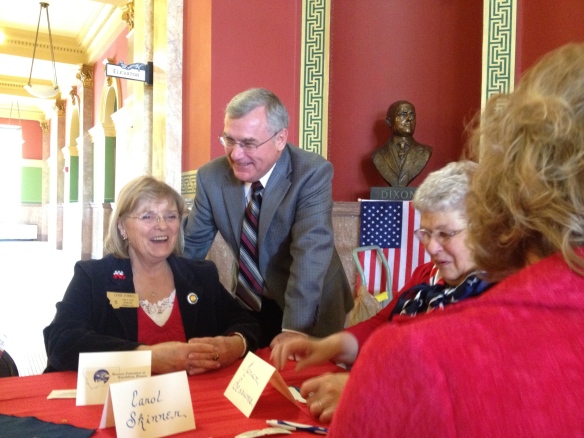 Republican gubernatorial candidate Rick Hill still seems to be carrying momentum into tomorrow’s primary election. The former Montana Congressman has raised by far the most money in the GOP race.

Rick Hill jaunted up the steps leading to the third floor of the State Capitol building. The Lewis and Clark County Republican women were taking a picture on the stairs before a luncheon—and they asked him to join in.

“Republican Women are the backbone of the Republican Party,” Hill said during the luncheon late last week. He casually moved between tables luncheon, chatting-up some of the ladies. His wife is in the group so he knows most of them.

It was mostly well-wishing, no really intense conversations on the issues. He’s willing to have those at any time, though.

“This has been the most fun political campaign I’ve ever been involved in in my life,” Hill said.

He says it’s been a hard-fought primary in the crowded G.O.P field.

“I think it’d be fair to say we have an eclectic group of candidates,” Hill said. “They’ve been fun people to get to know.”

He says that even as those other candidates are looking for ways to de-throne Hill as the presumed front-runner. Hill’s opponents point to his experience in the House of Representatives as evidence Hill is a Washington insider who’s lost touch with real Montanans.

“What bothers them is I have broad experience in the private sector and the public sector,” Hill replied.

Hill is a businessman who served under Governor Mark Racicot as chairman of the Montana State Fund. He was Montana’s lone U.S. Representative from 1997 to 2001. He left due to problems with his eyesight he says have since been corrected. He says he knows how to get bills passed and build a strategic plan.

“So they’ve tried to turn that into a negative but I really think it’s a positive. I think right now what people in this country and Montana want are experienced leaders that know how to get things done,” Hill said.

Hill says he has a broad economic mission for the state. He pledges to create between 30-thousand and 40-thousand jobs in his first term. He says regulation is keeping Montana from fulfilling its potential and that goes beyond increasing natural resource development.

“All kinds of businesses, whether you’re in the hospitality business or the healthcare business or the financial services business or the construction business. All of those industries are being adversely impacted by what we have in Montana, which is an adverse regulatory and legal climate,” he said, adding it’s a climate our neighboring states do not have to face.

Natural resources do make a piece of that plan. Hill says Montana can increase production and create jobs without affecting the quality of life for everyone else. He says we can have the Treasure State and Big Sky Country at the same time.

“We’re not talking about lowering environmental standards, we’re talking about implementing a process so that people have a predictable process with a predictable outcome in the regulatory process,” he said. And he wants to use more revenue from that development to pay for K-12 education. He says Wyoming has been doing that with coal development for decades.

“They have a much lower non-graduation rate than we do. they’re able to help kids get into college better than we do. They have better schools, they pay their teachers more,” Hill said. “I don’t know that we would get to the point we could rely entirely on natural resource revenues to support education but I think we could substantially lower property taxes for most Montana residents and for most small business and that would be a good thing.”

Hill talks about limiting the Federal Government’s presence as a cornerstone of his campaign. He lists the Affordable Care Act and wolf management as examples of federal overreach and says Montanans need to push back against that.

“Even beyond that, we need to demand the federal government manage its lands in Montana better than they do,” he added. He says the large swaths of pine-beetle killed trees on national forest lands overlook an economic opportunity and limit certain types of recreational access.

“Are your positions on social issues, are any of them different than what we may consider the standard Republican Platform?” I asked Hill.

“I don’t know what the standard…The Republicans are all over the place on the social issues but I’m pro-life. I believe in traditional marriage, which Montana voters put into our constitution and I think it should stay there. If that’s what you’re asking I am a social conservative,” he replied. He is also in favor of the death penalty and calls himself a strong supporter of the Second Amendment.

The Republican race for governor is anything but certain. But Rick Hill says he is being called the front-runner for a reason.

“One of the ways you get the largest amount of financial support and largest amount of volunteer support is you have a vision people believe in. I think that’s what’s reflected in the success of my campaign so far,” he said.

We shall see if that success carries all the way to Wednesday.