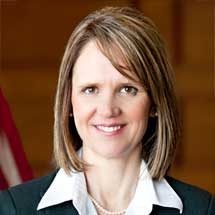 Democratic Attorney General Candidate Pam Bucy says she knows a lot about the seat she is looking to win. She served as the Executive Assistant Attorney General under former Attorney General Mike McGrath for seven years. Bucy wants voters to focus on that experience when choosing between her and primary challenger, Jesse Laslovich.

Pam Bucy asked to meet me in the Lewis and Clark County Courthouse across from the County jail. She got her start down the hall in Justice Court and would have been pretty busy this time of day.

“One o’clock…that’s when the prisoners appear from across the street. That’s when we as county attorneys would go in and that’s when you do all your bond hearings and all of that,” she said.

Bucy says she learned so much about the criminal justice system from that job. She moved from the County Attorney’s Office to working for District Court, then over to the Supreme Court. Bucy wants Democrats to look at that legal experience, that courtroom experience when marking their primary ballots. Her opponent, Jesse Laslovich, points to his long experience as a State Legislator, in both the House and the Senate.

That’s something Bucy does not have. She says working with the Legislature is not an enormous part of the Attorney General’s job, though.

“The daily work of the Attorney General’s Office…is making legal decisions, making administrative decisions and in all deference to my good friend Jesse, this is not a legislative job, at all,” she said in a recent primary debate with Laslovich.

The A.G. does interact with the Legislature in pushing for funding and advocating for certain policies. She says she has as much experience as Laslovich as far as that interaction is concerned. She says she was doing it from the side of the Attorney General’s office since Laslovich’s first term as a young representative.

“I’ve been carrying the department’s legislation in the legislature for as long –you know, since he was 19 years old I’ve been doing that kind of work,” she said.

Jesse Laslovich also does have his fair share of legal experience as an attorney. He even worked in the Consumer Protection Division of the Attorney General’s office for a year.

“I was there for 7 and a half years doing a wide variety of work,” Bucy countered.

Both candidates are asking to be considered on their different types of experience because on substantive policy, they’re very similar. Bucy admits that.

“On some of the more major issues I really do think we probably agree and I think that’s why we’re both democrats and that’s what led us both to this place,” she said.

She says social justice issues would be one of her key priorities if elected.

“One of the things I’m very passionate about is ensuring that our insurance industry does not reintroduce gender discrimination into the purchase of insurance products,” she said.

She wants to better protect children from online predators. She says the Attorney General’s position on the state land board is key to getting fair market value for leases on school trust lands. And Bucy applauds current Attorney General Steve Bullock, especially when it comes to his defense of Montana’s ban on corporate campaign spending. That law now waits for judgment from the U.S. Supreme Court and Bucy says she would very much like to carry on Bullock’s work.

“I would absolutely be thrilled to make the argument at the United State’s Supreme Court that Montana’s people want to control their elections and not corporations,” she said.

Before she gets there, she would have to get through the November election. But she has to pass the primary first of all. Despite her resume, Bucy says running a statewide campaign is a whole different kind of challenge.

“I find this to be the toughest job that I’ve ever had to do,” Bucy said.